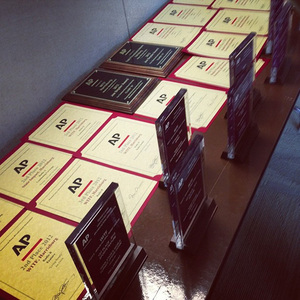 “To be honored for the second year in a row with the Joe Snyder Award for Outstanding News Service is tremendous recognition of the efforts put in by witf’s journalists each and every day. I’m proud of their work and committment to ensuring we meet our responsibilities in serving the public,” Multimedia News Director Tim Lambert said. “On a personal note, I’m thrilled our special coverage of the Major Richard Winters Leadership Statue in Normandy, France, last June, was recognized in the Feature and Series categories. Thanks to Ephrata National Bank, witf was the only midstate media organization to cover the event from Europe.  I hope the stories we produced did justice to the legacy of Major Winters.”

Judges’ Comments: Talking-head shows live or die by their hosts, and Nell Abom is wonderful at guiding and focusing the discussion on very important issues.

Judges’ Comments: Opens with the sound of the zipper of the tent where this couple has lived the past year. Such a lifestyle opens itself to all kinds of questions _ all of which are answered in the reporting. Even the steps are heard as the reporter and the couple head for the farm fields.

Judges’ Comments: Opens with sound but reporter paints word pictures throughout as well. Good storytelling about a Pennsylvania hero.

Judges’ Comments: Not much separated this well edited entry from the top two. Just not quite as complete and concise.

Judges’ Comments: Great job covering all aspects of the story. All the reporters involved thoroughly covered their individual pieces of the greater story.

Judges’ Comments: Excellent use of nat sound off the top. Reporter took me right onto the front lines of the issue and made me care to listen. Each story felt far shorter than its 7 minutes and left me wanting to hear more. Great job!

Judges’ Comments: Having to pay for police protection in a state capital. Good analysis of the dilemma. Good use of sound.