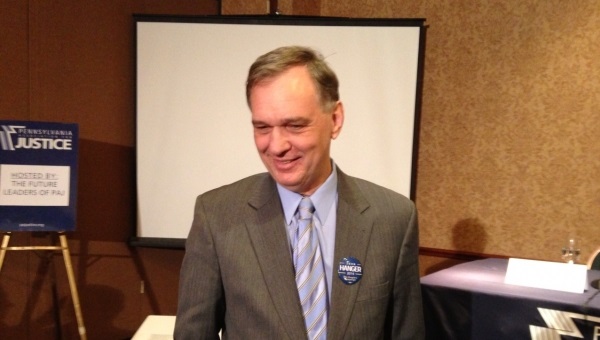 John Hanger, a top policy adviser and rhetorical brawler for Governor Tom Wolf, is stepping down from his post, the administration announced Friday.Hanger said he’s leaving the governor’s office to spend more time with his family in Massachusetts, where his wife has worked since 2010. Keeping two homes and a demanding job, he said, have worn on him. “My back is giving out,” said Hanger. “I’m not the kind of person, frankly, that can throttle back very well.”Throughout the state budget impasse, Hanger was seen as the governor’s in-house flamethrower. Just last month, during an interview on WITF’s Smart Talk, Hanger referred to the Legislature as irresponsible and called GOP House Speaker Mike Turzai part of the “radical right.””I don’t apologize for obviously advancing the governor’s positions strongly and hopefully clearly,” said Hanger. “That’s part of the job here.”Drew Crompton, a top Senate GOP aide, said Hanger is not unlike policy advisers in prior administrations that have been strident. But in the Wolf administration, Crompton said, fierce personalities have sometimes gone unchecked. “John Hanger doesn’t give a damn about being liked. He cares about propelling the governor’s agenda,” said Crompton. “That’s at times good, and at times it’s detrimental to what they’re trying to advance.”Before joining the governor’s staff, Hanger was Wolf’s opponent in the Democratic primary for governor. He is also a former state environmental protection secretary, an ex-member of the Public Utility Commission, and former head of the environmental advocacy group known as PennFuture.Sarah Galbally will take Hanger’s place as Wolf’s top policy aide.Hanger’s departure comes a little less than a year after the Wolf administration bid adieu to another attack dog and former Democratic primary rival, Katie McGinty. She left her post as chief of staff last July to run for U.S. Senate.

At Flight 93 memorial, a dream is realized