Gwen Ifill was a Chambersburg girl 50 years ago 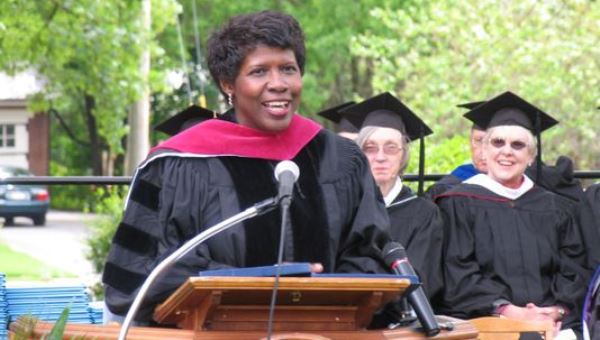 (Chambersburg) — The late journalist Gwen Ifill lived two years of her childhood in Chambersburg about 50 years ago.

The host of ‘Washington Week’ and ‘PBS NewsHour’ died Monday “surrounded by friends and family,” according to a statement from PBS. She had battled endometrial cancer while covering the presidential campaign this year, according to CNN.

Ifill, 61, has been described as a role model for journalists and a pioneer for young women.Â She covered seven presidential campaigns and moderated the vice presidential debates in 2004 and 2008 and a presidential primary debate between Hillary Clinton and Bernie Sanders.Â Agraduate of Simmons College in Boston, she worked at the Baltimore Evening SunÂ and theÂ Boston Herald American. She became a national political reporter forÂ The Washington Post and the White House correspondent forÂ The New York Times.

In 2006 she spoke at the Wilson College commencement. The women’s college awarded her an honorary doctorate, her 16th at the time.

“She is a marvelous role model for our students,” then-President Lorna Duphiney Edmundson had said. “We were very, very pleased to have her here and she did not disappoint.”

1) Know you are called to a mission.
2) Know you have limitless choices.
3) Resolve to fix one flawed relationship.Â
4) Resolve to cross a barrier.Â
5) Change the world, using the above.

“She had the driver who was driving her to the commencement drive past the house (on South Street) on her way because she wanted to see the house where she grew up,” St. James Pastor Roger W. Wilmer Jr. said.

Ifill’s family during the mid-1960s lived in what had been the parsonage of the St. James African Methodist Episcopal Church on South Street, Chambersburg. Gwen Ifill would have been a pre-teen when she attended Thaddeus Stevens Elementary School in the neighborhood.

“He was a very nice man who came around and visited,” said Mildred Kelly, 90, a church member for 85 years. “He had a very lovely wife. I don’t recall the family.”

Urcille Ifill once visited Kelly and her husband, who had just gotten a job at Letterkenny Army Depot. They lived in the “old projects” behind Southgate Shopping Center.

“He said to my husband: Get your wife out of here. She deserves a better place to live,” Kelly said. They soon found a place on South Main Street where she has lived for 48 years.

“I don’t recall the family,” Kelly said “I wasn’t familiar with Gwen.”

Gwen Ifill was born in Queens on Sept. 29, 1955. She was the fifth of six siblings. Her mother, the former Eleanor Husbands, was a homemaker from Barbados.

Her father, an immigrant from Panama City, became an AME pastor, and his career took the family throughout the Northeast — New York City and Buffalo in New York, Springfield in Massachusetts and Steelton and Chambersburg in Pennsylvania.

In 1967 he represented the National Association for the Advancement of Colored People on Pennsylvania Gov. Raymond P. Shafer’s Committee on Migratory Labor.

Urcille Ifill was pastor of the A.M.E. Union Church in Philadelphia from 1978 until 1988. He was president of the Black Clergy of Philadelphia and Vicinity from 1985 to 1987. He rallied support for W. Wilson Goode who became the city’s first black mayor. He died of a heart attack in 1991.

“What a history to have in the church,” Wilmer said. “The family provided ministry to the community and moved on to do greater good.”

The church celebrated its 205th anniversary in September.

“We reached out to Gwen Ifill to see if she would be a part,” Wilmer said. “She said she could not work it into her schedule.”

This article is part of a content-sharing partnership between WITF andÂ Public Opinion Online.